Safari tours in Cameroon are centered in the northern part of Cameroon. This is due to the Saharan climate here and a savannah vegetation type. The northern regions of Cameroon have rich potentials in safari but due to some security issues in the region, we don’t provide tours to national parks like Faro, Waza and more. This package includes a safari trip inside the Benoue National park and the Bouba Ndjida national park. They are both rich in wildlife.

Bénoué National Park covers an area of 180,000 ha (444,790 acres) in size. It was first established as a fauna reserve in 1932, but later in 1968 it was upgraded to national park. It became a biosphere reserve in 1981. Its vegetation is characterising by a humid savannah woodland area. The main river flowing through the park Is the Benoue river which stretches for over 100 km (62 mi), forming the eastern boundary. The park’s altitude ranges from 250–760 m above sea level. The higher elevations are characterized by large rocky massifs, while the undulating plain and forest characterizes the lower section.

Getting there: Access to the park is from Ngaoundéré, on the National road number 1. It’s a 2 hours drive from the town of Ngaoundéré. The best time to visit is around February when the grasses are burnt to allow fresh shoots of grass. This attracts a lot of animals and improves the panoramic views. 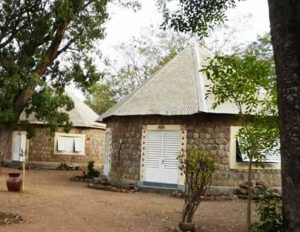 Accommodation; The camp of the black buffalo which host some bungalows, chalets and restaurant. The camp is located at the banks of the river Benoue and swimming is possible.

Bouba Ndjida National Park covers an area of 220,000 hectares (540,000 acres). In 1932 it was established as a reserve and later in 1980 it was upgraded to become a national park. The average elevation varies from 251 to 864 m and the parks vegetation is of savannah forest.. The park receives an average annual rainfall of 1082 mm. .

Accommodation; This is centered on the safari lodge.

The temperature is high here, above 45 degrees Celsius.

Day 1; We shall meet in Yaoundé at your hotel to prepare and discuss about our trip. Later in the evening we shall bored a Cam rail overnight train to Ngaoundéré. You shall enjoy the beautiful view due to changing landscapes from the lush south to the dryer north of the country. We shall arrive in Ngaoundéré early in the morning.

Day 2; Arrival in Ngaoundéré we shall be pickup by a 4x4 and drive to Bouba Ndjida national park. While at the park we shall spend the night at the campsite Safari lodge constructed with local bricks. It has good rooms with AC, restaurant and more.

Day 3; After breakfast we shall go for a safari with a 4x4 car. We later return to the camp for lunch. In the afternoon we shall continue our safari in the park. We spend another night here.

Day 4; After breakfast in the morning we shall depart Bouba Ndjida national park for the Benoue national park. While at the Benoue park we shall check in at Black buffalo camp for the night.

Day 5; We shall do some safari in the park on a 4x4 car. Later we return to the camp and view some hippo’s on the banks of the river Benoue. We  shall depart Garoua for Ngaoundéré. At Ngaoundéré we shall bored the Cam rail train for Yaoundé.

Day 6; Arrival in Yaoundé in the morning, a car will transfer you neither to your hotel in Yaoundé or to the airport Nsimalen of Yaoundé. End of tour.

There are no reviews yet.

Be the first to review “Cameroon Safari tour” Cancel reply

Cameroon Safari tour Safari tours in Cameroon are centered in the northern part of Cameroon. This is due to the Saharan climate here and a…